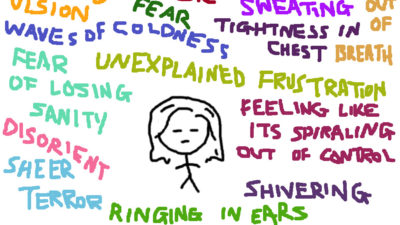 What happens during a panic attack is that adrenaline is rapidly released throughout the body. This is the fight-or-flight response, the evolutionary self-preservation method. That adrenaline causes muscles to tense and causes your heart to beat even faster. Because of the rapid heart beat and contracted muscles, we tend to breathe in more oxygen which our muscles convert into energy. Our digestive system stops, conserving and preserving excess energy. The senses are drastically heightened, you’re hyper aware of smells and sounds. The body is physically and mentally prepared in case we need to fight for our lives or run from hazardous situations.
Because of the excess adrenaline flooding the body, you may experience various uncomfortable symptoms such as: