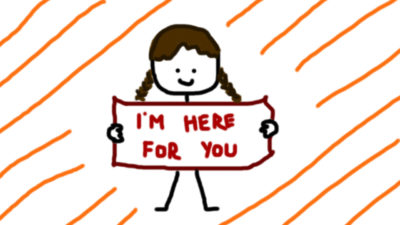 Helpful Things To Say To Someone With Anxiety

I’m sorry you’re going through that. That must be difficult for you.

One of the worst things is to contribute to the panic and emotion that’s occurring. Becoming overly concerned or panicky about someone’s panic will only add fuel to their fire and won’t help. An anxiety attack can bring on overwhelming dread which can be physically debilitating. Voicing sympathy instead of concern is an effective method.

Please let me know if there’s anything I can do.

Genuinely offer support in the moment. It’s natural to want to take action in order to help, but most of the time someone who’s having an anxiety attack just need acknowledgment that you’re there for them during the attack.

Do you want some space?

In some cases people DO need quiet alone time to calm themselves. What people who are having an anxiety attack don’t like is to have someone assume they want to be alone and leave in haste.

During an anxiety attack, people feel guilty that they’re not as productive as they think they should be. They can also feel unnecessarily pressured to quickly get over their anxiety attack to not “waste” others’ time and be a burden to them. Let them know that there’s no time frame, and that they have all the time in the world to recover to their normal equilibrium.

Can you tell me how you’re feeling?

Explaining deep fears and worries out loud during a panic attack can help bring things into perspective instead of letting those worries continue to spiral out of control. Be understanding and listen to whatever worries and fears are bothering them without immediately trying to find solutions.

Do you want a hug?

There is great power in human contact. If you have anxiety, you know that human touch can make you physically feel that you’re not alone. During an anxiety attack, a hug or holding hands can mentally bring someone into the present and make them feel like they’re in a safe space.

During an anxiety attack the symptoms can feel never-ending. It’s easy to slip into the mindset that the attack will last forever. Telling them that it will pass is an external reminder that the feeling is temporary and will end like it always does.

I’m here for you.

It’s not what you say that makes a difference, it’s how supportive you are that matters. A lot of the times what’s most helpful is to have someone who is understanding and can listen to their experience without judgment.

Be supportive. Don’t say anything.

The biggest thing people need during an anxiety attack is to know that they have someone who’s there beside them during their attack. A lot of the time they don’t need (or even want) conversation as they’re so focused on dealing with their own mind, so silence can be a way to say all the things you don’t know what to say.